Submenu on the topic Institute

You are here: Homepage > Institute > Arrival 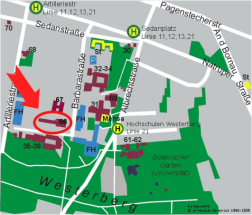 Of most interest are likely the maps of the area, the journey to the university and the map to the location Westerberg where the institut is resident. The Institut of Environmental Systems Research has the Number 66 in the building system of the university of Osnabrück.

Osnabrück is a cross station of the train lines Ruhrarea to Bremen/Hamburg and Amsterdam to Hannover/Berlin. Additionally, there exists a regional train system to Oldenburg/Wilhemshaven. Timetables are available here.

Central crosspoint of the buslines is the Neumarkt. From bus stage A2 the lanes 11/12 (Eversburg-Büren), 13 (Attersee) and 21 (Atterfeld) direction university (Westerberg) / USF are leaving. For further information and timetable visit the offical timetable.

Using bus lane 21 exit at "Hochschulen Westerberg". Using the other lines exit the bus at station "Sedanplatz". From there cross the street "Natruper Straße" and turn right and follow the "Sedanstraße" crossing the "Albrechtstraße". At the first intercross turn left following the "Barbarastraße" until the end of this street. The building (number 66) of the Institut of Environmental Systems Research is located on the right side.

The public services of Osnabrück also offer information of the bus lanes. There is a layout of the buslines (.pdf) and a trip planner.

Through the airport Münster/Osnabrück there is a connection to international air traffic. There is a express bus lane from the airport (X150) available to the Neumarkt. From there continue using the bus lanes a described above.